Join us for a post-covid SUMMER EVENT – a sunset sail on Lake Union/Lake Washington with the Dusty 45’s and special guest Lushy. The Dusty 45s have inspired and fired up crowds for over two decades to the delight of fans and critics alike. With their signature style and unique sound, the band is a consistently powerful and energetic player in the Americana field.

Sip on Tiki cocktails with good friends and enjoy live music on our open air venue is the perfect place to socialize and enjoy a summer breeze.

On The HIYU is also available for private party and private event rental –
please contact us for more information. It was so nice, we’re doing it twice! Our sold our Seattle Sunset Tiki Cruise is back for another round of tiki fun.

Enjoy live music by The Boss Martians at the Delstroyers. Sip on concoctions by guest bartender Sierra Kirk of Hale Pele from Portland. Munch on Paseo Caribbean Food while cruising around Lake Union. 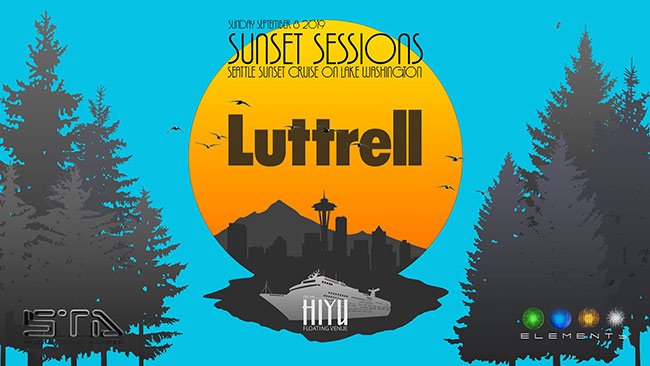 Influenced by everything from the sunsets of his San Francisco hometown to DJing the playa at Burning Man, Luttrell’s unique brand of melodic techno has seen him gain heavy support from BBC Radio 1, and receive remix requests from renowned acts Moby, What So Not, and Tycho. Annie Mac made ‘Intergalactic Plastic’ her Hottest Record in the World, and his productions have also been supported by Pete Tong, Kolsch, Joris Voorn, Lane 8 and many more. His early musical influences include The Smashing Pumpkins, Nirvana, and The Prodigy, but a semester spent studying in Berlin introduced him to techno.

Now a mainstay of the Anjunadeep touring family, Luttrell has performed at major venues on both sides of the Atlantic, from Bill Graham in San Francisco, to London’s Printworks. 2018 saw him play Holy Ship, the DoLab at Coachella and Tomorrowland, plus supporting Above & Beyond, Rüfüs Du Sol, and Lane 8 on their US tours.

He kicked off the year with his debut artist album ‘Into Clouds’ and an accompanying 23 date North American tour. He will play Lightning In A Bottle, Electric Forest and Anjunadeep Explorations later this year, in addition to many other great festivals still to be announced.

this is a rain or shine event, tickets are EXTREMELY LIMITED so don’t wait. 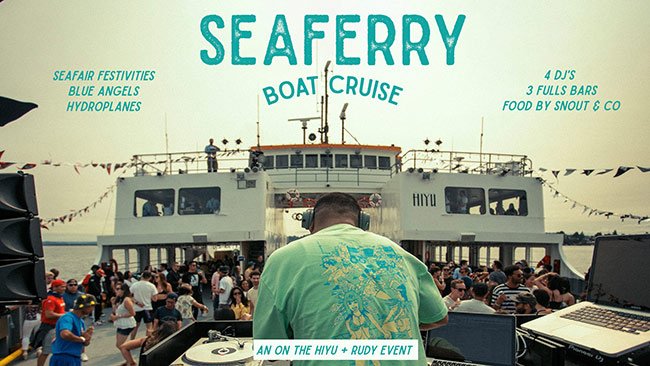 Take in the sights of Seafair on a vintage Washington State Ferry Boat. We’ll cruise the lake to watch Blue Angels soar, hydroplanes roar, and beats bump. There will be 4 DJ’s, 3 full bars, food by Snout & Co, and good times all around.

Come aboard party pirates, let’s DO THIS! 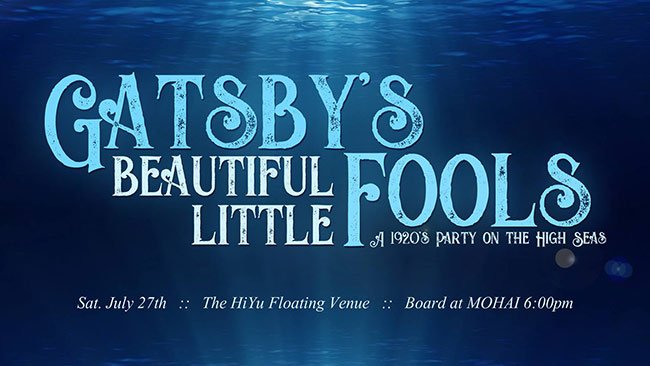 Gatsby’s Beautiful Little Fools: A 1920’2 Party on the High Seas

Join us for the 2nd Annual Gatsby’s Beautiful Little Fools: A 1920’s Party on the High Seas on Sat. July 27th aboard Seattle’s premier floating venue: The HiYu. THIS PARTY SOLD OUT LAST YEAR!

*DJ Understanding – spinning high energy electro-Gatsby tunes for your dancing pleasure so you can shake your tailfeathers.

FOOD: Food is not included in the cost of your ticket, but there will be a food truck on board The HiYu for guests to purchase food from. 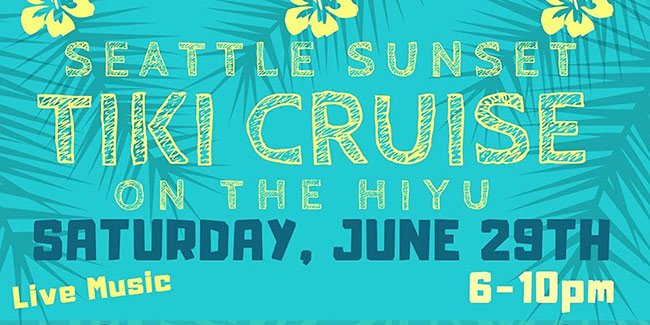 Kick off your summer fun with a Sunset Cruise on Lake Washington.  Enjoy  live music by the Dusty 45s and Lushy Trio.  Dance with your friends and take in the spectacular lake views from our open air deck.Sunset Tiki Cruise On the HIYU. 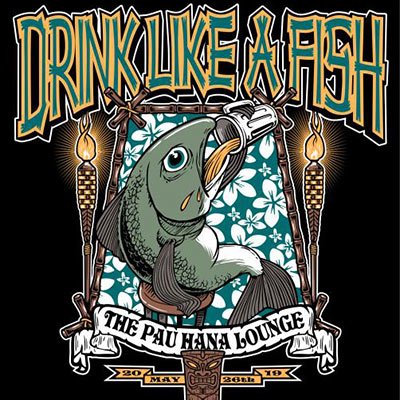 Showcasing breweries and locally crafted spirits, our tasting trip around Lake Union will bring you all of the best of Washington with Seattles world famous city-scape as your backdrop. You will discover hand-selected distilleries and breweries, each with their own unique style and history. Sample craft brews and spirits while enjoying local culinary bites while touring our beautiful city.

Fall in love with all  of them, No need to commit to one, the Drink like a fish cruise will give you a chance to taste them all 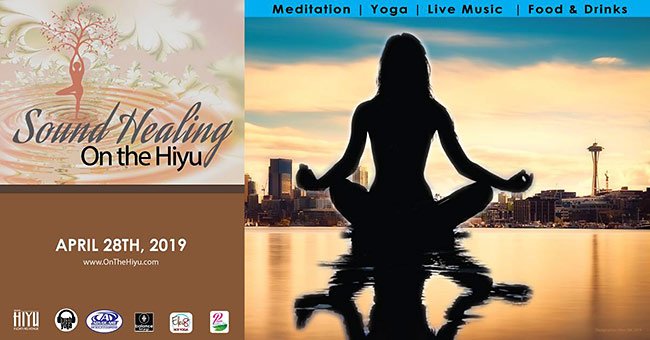 
With a gentle breeze caressing your skin you will be one with nature as we float through Seattle’s Lake Union and Lake Washington neighborhoods guided by some of Washington’s leading yoga instructors from Elev8 Hot yoga studios.

The amazing and talented Jana and Angela will lead the mediation and Yoga practices for the day. Sounds provided by the loved Rob and Melissa, their Kirtan band will take you through the rhythm of your stretches and will bring you to relaxation and then to upbeat grooves while simultaneously following the lead of our yoga instructors.

Guests will enjoy lunch provided by Paseo. Paseo Caribbean has been an icon to the Seattle community for over 25 years and has been recognized by legions of top critics, magazines and TV shows worldwide. 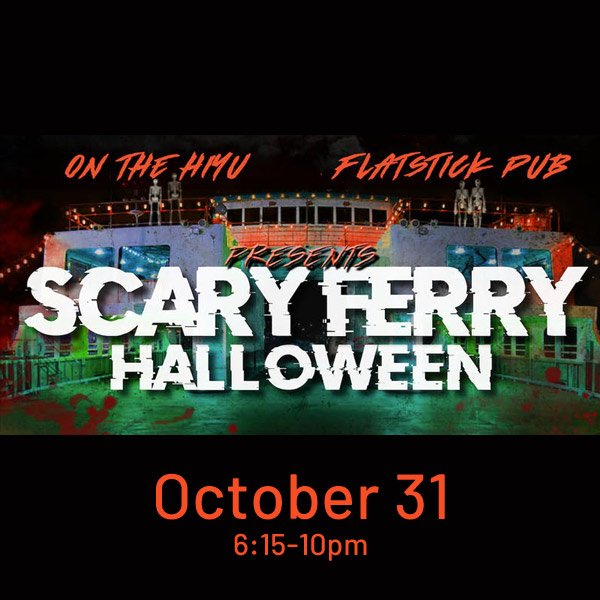 Scary Ferry – A Hauntingly Good Time On The HIYU

Ever wanted to take a haunted boat ride through Seattle’s Lake Union? Now is your chance! On the night of Halloween, partake in some seriously spooky fun including a costume contest, luxury photobooth with props from A Masquerade Costume, plus Monster Mash the night away with a live DJ. And don’t forget, the bar will be pouring your favorite drinks all night long. Spots are limited, so don’t wait!
Food and Beverage will be available for purchase on board. Must be 21 to attend 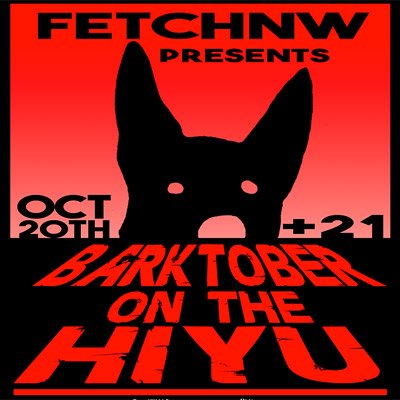 FetchNW is Seattle’s only furry boat cruise, and we’re bringing you an all-new party: BARKTOBER! The first furry Halloween-themed boat party on a fracking FERRY. Be spooky. Be fluffy. Dance until your paws hurt. And get this, you spoopy animals. This time there’s an all-new boat! Feast your fearsome eyes On the HIYU.

The Hiyu gives us a spacious outdoor deck, two well-appointed indoor passenger bar lounges, programmable lighting, a full sound system throughout the vessel, and 6 BATHROOMS. You want more space to dance? You got it. You wanna hang out on the deck? It’s there. You wanna chill by the bar? Done. And you know we’re gonna have great music. Grab a ticket, grab your fursuit, your friends, your friends’ fursuits, and come to have a great time. 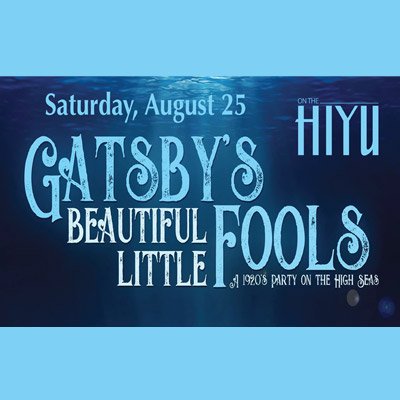 boarding at 6:30-7pm if you miss the boat…you’re out of luck! Don’t be tardy to the party!

Join us for this elegant and fun party aboard Seattle’s premier floating venue; the HIYU – a retired WA State Ferry that has been meticulously renovated – complete with a Tiki Bar!

Gatsby’s Beautiful Little Fools ushers guests back to the glamorous golden era of the 1920s – when flapper girls ruled and gents wore suspenders and the champagne flowed ALL night. We’ll be boarding the beautiful HIYU (boarding: 6:30-7:00pm) then setting off on the high seas (aka, Lake Union and Washington) for a fun-filled evening to watch the sunset, pop some bubbly, dance your butt off and be entertained by various circus troupe performers, dancers, musicians and our DJ. What a perfect summer’s eve party against the backdrop of the beautiful Seattle skyline and mountains!

To get your party started, guests will be welcomed aboard Jay Gatsby’s “yacht” with a glass of bubbly. (The HIYU features a full bar (no-host, credit or cash) featuring wine, bubbles, spirits and a few Signature Cocktails. 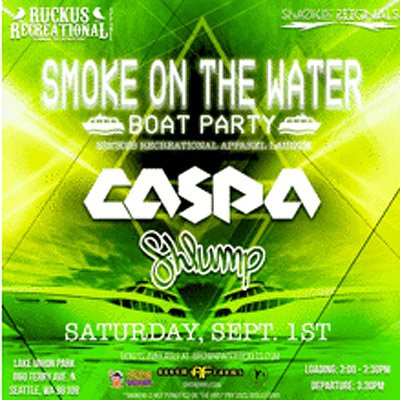 SMOKE ON THE WATER

We are excited to announce that the SLC SMOKE SIIGNALS crew is teaming up with our partners RUCKUS RECREATIONAL APPAREL to showcase a one of a kind experience to the residents of Seattle on September 1st when we set sail for an afternoon bass cruise ON the HIYU! We will be welcoming “The OG Ghost” aka CASPA,bay area badmon SHLUMP, SLC gang CULT 45 playing a special squad b2b and Seattle family DOWNLO will all be taking over a private yacht with PK SOUND to celebrate the launch of RUCKUS RECREATIONAL APPAREL with all of our homiies and cannabis industry friiends. Spread the word because TICKETS are VERY LIMITED and we want all the heads to join us for the celebration!

Check out the VIDEO FROM THIS EVENT HERE! 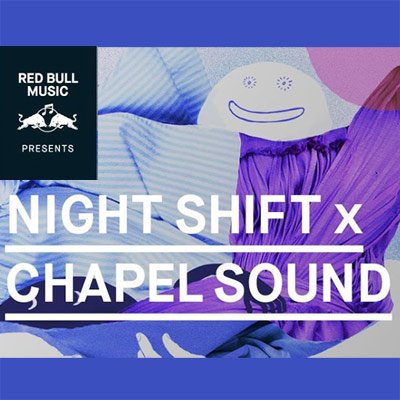 Two of the Northwest’s most influential DJ crews, Night Shift and Chapel Sound, connect to tell their stories and celebrate their sister cities of Vancouver and Seattle with a day of cruises aboard The HIYU Ferry. Expect back to back DJ sets from members of both crews, plus special guests that highlight the best of each city’s musical tastemakers.

Thank you - you have successfully subscribed!

We don't like SPAM, your email is safe with us. You can always unsubscribe.